National-Award-winning actor Dhanush received a plethora of birthday wishes as he turned 38 on Wednesday. However, it was his ‘Atrangi Re’ co-stars Sara Ali Khan and superstar Akshay Kumar‘s wish that caught attention on social media. Taking to his Instagram story, Akshay Kumar shared a quirky picture that sees him and Sara pampering Dhanush as the three share a hearty laugh.

Alongside the picture, he wrote, “Your name is Dhanush, but even if it was Teer, it would have been apt You are so on-point with your talent. Happy Birthday, buddy. Keep shining. @dhanushkraja.” 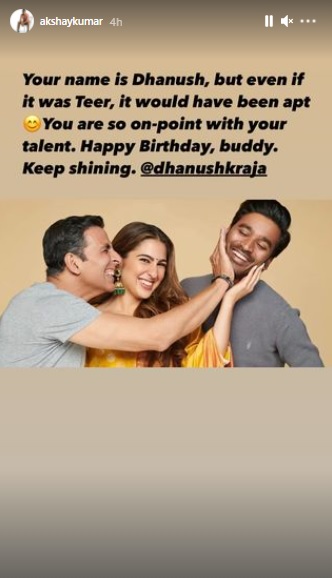 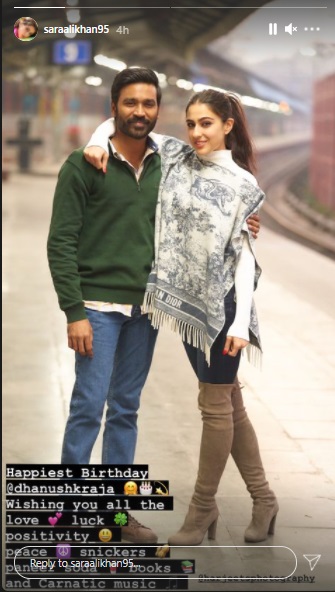 Dhanush, who predominately works in the Tamil film industry is known for his versatility in acting. The star who has an impressive array of roles under his belt is one widely appreciated actor down South. He has done more than 44 films to date and has won many accolades for his contribution to the entertainment industry.

His popular song ‘Why This Kolaveri Di’ from the romantic psychological thriller ‘3’ garnered millions of views on YouTube. ‘Maryan’, ‘Anegan’, ‘Kodi’, ‘Maari’ sequel are some of his other hit movies in Tamil.

He made his Bollywood debut with ‘Raanjhanaa’, and will next be seen in Aanand L Rai’s directorial movie ‘Atrangi Re’ which will have a neven seen before trio – Dhanush along with Sara Ali Khan, and Akshay Kumar. Apart from ‘Atrangi Re’, the National award-winning actor has ‘Aayirathil Oruvan 2’, ‘D 43’, ‘Naane Varuven’, ‘D 46′, and Russo Brothers’ ‘The Gray Man’ alongside Ryan Gosling, Chris Evans and ‘Brigerton’ star Rege Jene Page.

Mumbai: Bollywood actor Chunky Panday will be seen as the special guest on 'Zee Comedy Show' during this Sunday's episode, while Nikki Tamboli...
Read more
Entertainment