Seated comfortably in his room at a guest house in Vadapalani, just a stone’s throw away from AVM Studios, make-up artist Pattanam Rasheed is skimming through reviews of recently-released Thalaivii on his phone. One of them mentions the word ‘make-up’, which makes Rasheed sit up.

Also Read | Get ‘First Day First Show’, our weekly newsletter from the world of cinema, in your inbox. You can subscribe for free here

He has been getting a lot of praise for the look of MGR, played by Arvind Swami in the Kangana Ranaut-starrer that is currently running in theatres.

“I go a long way back with director Vijay, with whom I first worked with on Madrasapattinam (2010),” he recalls, “During that time, he had a lot of reference material for the British soldiers and locals featured in the film. Subsequently, I worked on most of his projects. It was during the shoot of GV Prakash-starrer Watchman that he showed me the title and details of Thalaivii and I was super excited.”

Pattanam Rasheed, a National Award-winner, immediately began collecting material about MGR. “Everyone in Tamil Nadu knows MGR. I realised that this would be a big test for me, since I had the responsibility to bring him alive for audiences.”

The biggest challenge was to arrive at the looks, covering all phases of MGR: his entry into cinema and politics, and when he was not keeping well.

“Arvind Swami is an actor who prefers less make-up, as he is fair in complexion. But for Thalaiivi, he had to apply a lot of make-up to get into character. The trend in make-up used during MGR’s time is not in vogue now, so the challenge was to re-create that using the products of today.”

For the film, Rasheed used specially designed prosthetic teeth set on Arvind to ensure he resembled the matinee idol. “For the portions in which we show an aged MGR, we had to use a special shading technique on the actor’s skin, apart from the double chin and the prosthetics used near the neck.” 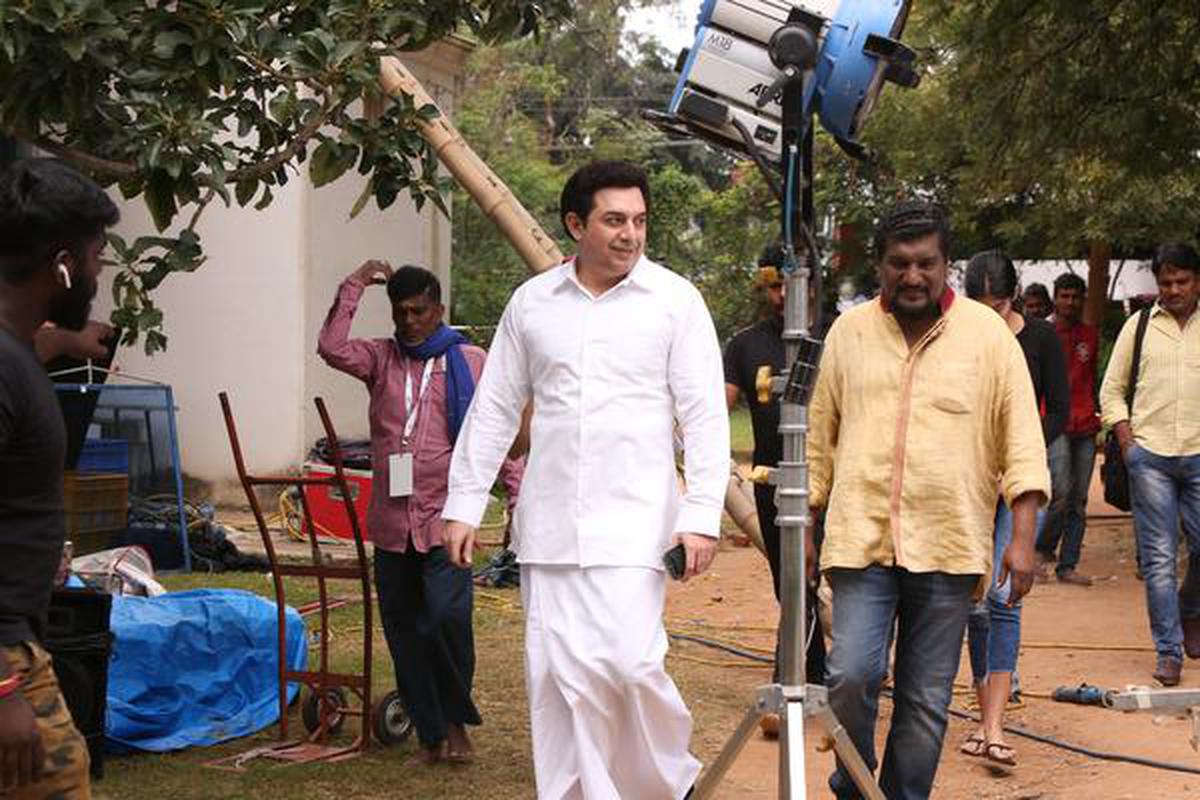 Rasheed has worked in multiple languages and genres, but prefers historical subjects. “It helps me put a lot of thought and effort,” he says, citing examples like Kaaviya Thalaivan and Kanchivaram, apart from mentioning Mohanlal’s Paradesi and Odiyan as among the toughest projects till date. Currently, he is working on multiple Tamil projects, including GV Prakash’s Jail, Suriya’s Jai Bhim and Karthi’s Sardar.

Pattanam Rasheed regards Kamal Haasan as one of his make-up gurus, whom he first met on the sets of Chanakyan (1989). “He had a make-up artist called Salim from Nagercoil, whom I have assisted too. Kamal had a keen interest in make-up trends; in fact, he introduced me to a few international make-up products back then.” Later, he worked with the star on Chachi 420, the Hindi version of Avvai Shanmughi. “That film also gave me the opportunity to work with Hollywood make-up artist Barry Cooper, from whom I learnt a lot about prosthetic make-up techniques,” says Rasheed, who has also worked in Kamal’s Indian 2, directed by Shankar.

Rasheed debuted as a make-up artist in 1985, and has since kept his tryst with the profession. In these four decades, he has seen not just the ascent of several superstars, but also been witness to sweeping changes in technological advancements that have impacted the industry. “New-age filmmakers sometimes do not prefer make-up. They state that it takes away from the natural texture of the actor. They tell actors to present themselves without make-up. During such occasions, I have learnt to adopt techniques to ensure that make-up is so minimal that audiences will not even realise that it has been applied.”

Rasheed keeps to date with make-up trends across the world by browsing the Internet and reading magazines. His most prized possession is American special make-up effects artist Dick Smith’s book on professional make-up, which he considers a bible for anyone looking to make a mark.

That book has prime place in his make-up academy in Ernakulam, which he set up in 2010 with the prime intention of imparting his life experience and techniques to the younger generation. “When I entered the industry in Madras, I had to learn everything on-the-job. The younger generation today considers this field as a profession, just like engineering or medicine. They need to be guided on the nuances of the profession.”

He is most happy when he hears of his students going places. They are mostly established artistes, like last year’s National Award winner Ranjith Ambady (for Malayalam film Helen), one of his assistants. “It gives me great pleasure to see them doing well.”

This sequel to the 2016 hit is engaging enough, but does not achieve the greatness of the first movie Set eight years after the...
Read more
Video