There was no stopping Jiri Lehecka this week in Tampere, Finland. The teen blitzed a strong field at the ATP Challenger 80 event, refusing to drop a set en route to the final, where he overcame Nicolas Kicker 5-7, 6-4, 6-3 on Sunday.

As the sun set on the 39th edition of the Tampere Open – the longest-running tournament on the ATP Challenger Tour – Jiri Lehecka gave the Finnish fans a glimpse into the future. The youngest player from the Czech Republic in the Top 300 of the FedEx ATP Rankings, the 19-year-old battled back to defeat Kicker for his maiden title.

It was a breakthrough moment for Lehecka, who has been steadily progressing on the Challenger circuit since his debut in 2019. He becomes the seventh teenage titlist this year, joining a strong group of #NextGenATP stars that includes Carlos Alcaraz, Brandon Nakashima and Juan Manuel Cerundolo.

The future of Czech tennis has arrived. One year ago, Tomas Machac claimed his maiden ATP Challenger Tour title at the age of 19. Towards the end of the 2020 season, fellow 19-year-old Jonas Forejtek stunned Marin Cilic in his ATP Tour debut in Sofia. And on Sunday, another 19-year-old Czech had his moment in the spotlight. With countrymen Vit Kopriva and Zdenek Kolar also making noise in recent weeks, it signals something special for the European nation.

Lehecka will soar 41 spots to a career-high No. 213 in the FedEx ATP Rankings on Monday. He also rises to 12th position in the ATP Race to Milan, seeking to make a late push to qualify for the Next Gen ATP Finals.

Jiri, congrats on winning your first Challenger title. How does it feel? What are your emotions?
It feels incredible. I’m really happy I achieved that. It’s a lot of satisfaction after a lot of hard work. It will be good for me in the future and I’ll continue working hard with my team. Of course I’m very happy to win here in Tampere.

Talk about the final. Were you nervous today?
I’m always nervous, especially when I’m about to play in a final. But it was ok. I dealt with the nerves. They showed up at the end of the first set. I had some chances there and I did not use them. But then I started to play better and better. I was more confident with my serve and it was good in the end.

It was an amazing tournament for you. You didn’t lose a set entering the final. How do you explain what you achieved this week?
When the draw came out, I wasn’t too excited. I saw I played third seeded Antoine Hoang in the first round. Then, it was Nicolas Jarry or Jonas Forejtek. Jarry won, so I knew that it would be another hard match. I played him a few weeks ago in Salzburg. I knew that it won’t be easy, but I played good tennis. The conditions here are good for my tennis and for me to focus on my game. I felt good from match-to-match. Every day was better and better.

In the quarter-finals, it was hard to play against Otto Virtanen on home soil here in Finland. He had a lot of supporters here. It was more about your mind than your game. I could handle it really well. In the semi-finals, against Kyrian Jacquet, I destroyed him. My game was bad for his tennis. And in the final, against Kicker, he was Top 100 in 2018 and is a clay specialist. It was a tough match and I’m happy I won.

This is your first full season on the ATP Challenger Tour. What is the key at this level?

It’s a completely different level coming from Futures. Players here are more experienced. There are players who were in the Top 100 at some point. And there are many young and talented players coming up. You need to play every ball and understand that no one will give you anything for granted. You need to play your best tennis.

You are the third Czech champion this year, joining Tomas Machac and Zdenek Kolar. Does their success inspire you?
This is really good for all Czech guys, even the younger guys. If you see that other players are doing well, it will motivate you. It pushes you higher and higher and to keep working hard. You want to do even better than the others. Of course I’m happy for them and their success can be mine in a couple months. Machac is in the Olympics and Kolar just won his second Challenger title. It’s good to push each other up and play together at this level.

What part of your game has improved the most this year? What are you working on?
I think that I calmed down a little bit this year. I had a lot of emotions on the tennis court. I’m just trying to be more positive and trying to practise better each day. Be more positive and go 100 per cent and with that the success will come of course.

This is your first time in Tampere. Talk about the tournament. How did they make you feel comfortable this week?
Here in Tampere it’s a very nice site. I love Finland. It’s a very nice country. A lot of beautiful nature. I was really happy to come here, because I heard that the tournament has a tradition. It has a history. A lot of good players won here. The hospitality was really good, and the shuttle and food too. It can be seen that over the last 40 years they have a lot of experience. 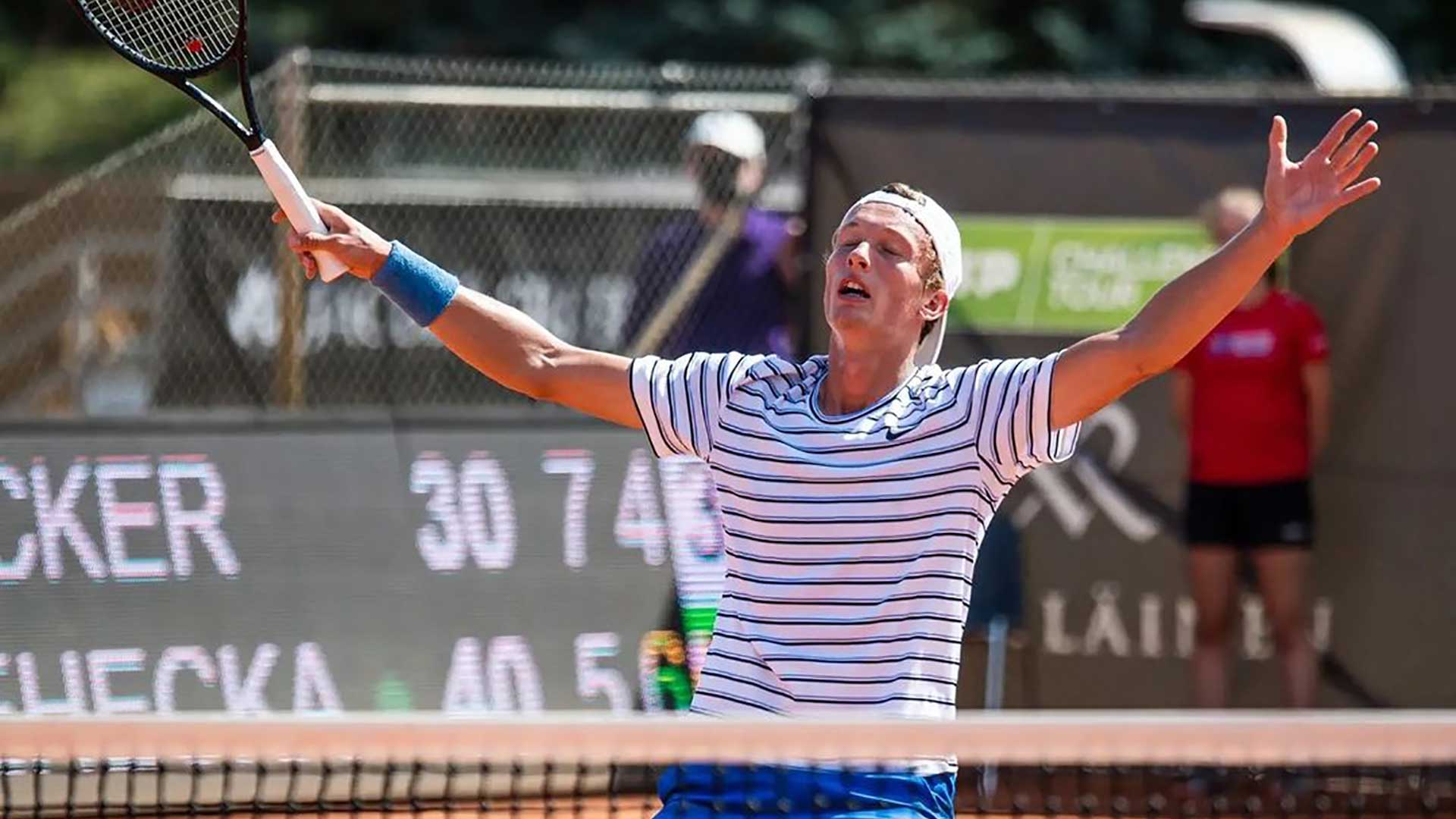 Who has had the biggest influence on your career? And why?
My coach Michal Navratil of course. So many people have had an impact on my career. Even if it’s my physical coach, my family, my parents and my girlfriend. So many people are trying to push me forward and to be better. Also my mental coach and my manager. There are so many people trying to help me. It wouldn’t be possible without them all.

Outside of tennis, what is your biggest passion in life?
I love all other sports. Sport is my passion. If it’s not tennis, I love to go on the bicycle or go skiing. Sport is my passion all the way up and down. I grew up in a sporting environment. Both my parents were professional athletes. My mother did track and field and my father was a professional swimmer. I have the genes to be a sportsman.

You are closing in on the Top 200. Do you have any goals for the rest of the year?
Of course I would like to enter the Top 200 this year. We’ll see. I would like to win another tournament too. You need to play better every week and we’ll see what it will bring. I think we are on a good path.

Nick Kyrgios: ‘This Is Our Best Shot’ | ATP Tour

Nick Kyrgios has made it no secret how important the Laver Cup is to him....
Read more
Tennis

Bjorn Borg On Team Europe: ‘This Is The Future Of Tennis’ | ATP Tour